Just before christmas last year I had the pleasure of spending a weekend in Sevilla in Spain visiting a friend that had recently moved there.

Traveling is always a good way to get new inspiration or get out of a block, even shorter distances can do the trick. I think it is good to see things from a new perspective, and it can be the smallest things that will tricker your mind to come up with new ideas.

Sevilla is a very visited city, it is a city full of beautiful architecture, cosy small spanish streets in the old quarter of the city, and appears to be a place full of delicious foods too.

But one of the most inspiring things for me from this visit, was the Feria Posters that you see everywhere. The city each year in april celebrates the Feria de Abril- a city wide party- and each year they produce a poster for this. The posters you see everwhere, on postcards, and in the tourist shops. 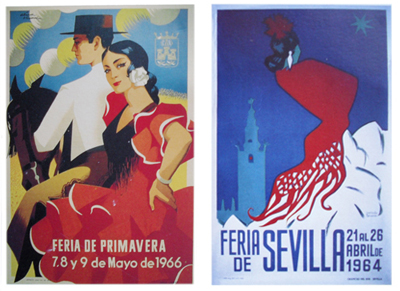 Poster from 1966 by José Álvarez Gámez, and from 1964 by Antonio Abelardo Garciá Fdez

There is a certain timeless effort in these posters, often very graphic, simple shapes, complimented by strong colours, and very little- but well arranged- text. The tradition is to show the iconic Sevilla- the Sevilanas in their dresses, the guitar, the men on horseback in traditional outfits. 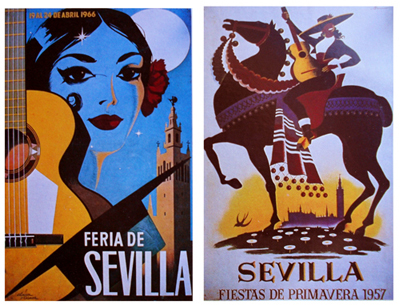 Poster from 1966 by José Álvarez Gámez, and from 1957 by Ramón Blanco Casal

I wanted to do my version of a feria-styled poster, and decided to use my friend as a model for it. Although she is not a Sevillana, she was playing with the idea of acquiring one of these flamenco-styled dresses that the ladies dress up in for the Feria- and I think she would look just great! 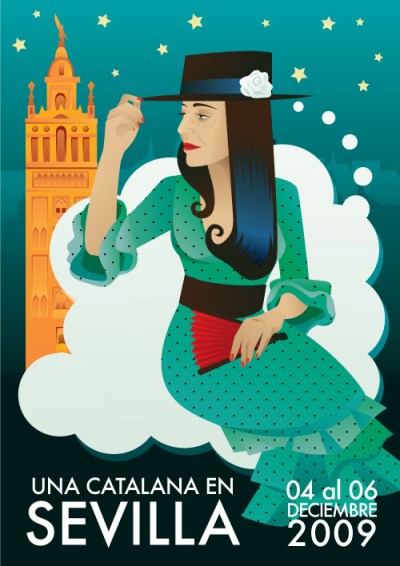 My version of a Feria Poster

I haven’t been able to find a lot of information about the painters and traditions of the feria posters, if anyone knows I would be interested in hearing more  about it all- links welcome.

AdriftFirst illustration of the year